The story of the devil is a part timer revolves a demon lord Satan seeking to conquer the land of Ente Isla but after his efforts are thwarted and he is defeated by the hero Emilia, makes a desperate escape through a portal and now finds himself in a modern-day Tokyo.

Amidst the modern-day Tokyo, the satan takes the form of a human. With no magical abilities in the new realm and having to fend for his survival, the satan takes up an ordinary job at a local fast-food chain. The days of conquering Ente Isla are long gone and going mundane human tasks become the norm. After a while, the satan (the boy Sadao Maou) meets a girl who happens to be Emilia in a human form. The story follows their daily chores and explores the character of each while more characters show up from Ente Isla.

Classroom of The Elite Season 2 – Everything We Know So Far

Is There Any Hope for The Devil is a Part Timer Season 2?

If there is any deserving anime for season 2 it has to be this anime. The devil is a part timer season 1 was a huge hit and fans since then have been eagerly waiting for the second iteration of their beloved anime series. As of now no clear information from white fox is available on the matter. The anime has neither been canceled nor given a green light for another season.

With the light novels now reaching more than 20 volumes, there are endless possibilities for the anime adaption. Season 1 of the devil is a part-timer only covers the main plot of a few light novels and there is a great amount of quality content yet to be explored. The author Satoshi Wagahara himself is a fan of the anime series and has done considerable efforts for the reboot of the anime.

Eventually though what it all comes down to is WhiteFox studio. With the studio being engaged in the production of many other anime its most likely we will not see season 2 anytime soon. Despite all the efforts of the fans and the other people surrounding the anime, the final decision will be whether WhiteFox sees it as a potential profit and goes ahead with another season or cancels it altogether eventually because at the end of the day an anime is also a business first.

Not all hope is lost though as the production can be picked up by another studio yes its Netflix we are talking about. With the devil is a part timer being streamed on the platform and Netflix pumping huge sums of money into anime, it’s not very unlikely. If this happens fans will finally be able to get what they have been wanting for a long time.

Expected Plot of The Devil Is a Part Timer Season 2

There is no official saying in this regard but many speculations can be made based on the common happenings in the previous season. It is widely believed that in season 2 the demon king satan will take up the role of a superhero and help civilians, saving their lives with his experience as being a former holder of magical capabilities. It is also expected that the demon king will be more focused on reaching the top of the social ladder among human society.

Some greater twist to the story is also expected and the appearance of a new character is also likely. With the plethora of material available in the light novel and the manga series its no wonder what exactly could be adapted into the anime series. One thing is for certain though that the anime won’t shy from portraying the difficulty associated with the most mundane tasks of our beloved characters and being a hilariously cute one at that.

The Devil is a Part Timer Season 2 Release Date

Season 1 of the devil is a part timer premiered on April 2013. Its been 7 years since the maiden season and even up till now no official statement has been made regarding season 2 by WhiteFox studio. Although it is highly likely we will not be getting season 2 anytime soon but recent developments have at least hinted for the arrival on another season. The rumors speculating the release of 2021 or 2022 cannot be verified but still paint a bright picture regarding the future of the anime. Also with season 1 of the anime now being available on Netflix reignites a new passion of the fans for another season.

To conclude all the details we have available as of now it can be said that we are far for the season 2 iteration. No official statement on the matter is available and everything is mere speculation or some optimistic thinking. Everything is not washed though some developments can be seen as a positive step further towards the production of season 2. 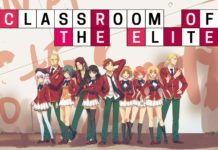 Classroom of The Elite Season 2: Everything We Know So Far

ABOUT US
HowHyped.com is a project created to provide accurate and legit news to anime fans and lovers around the world. Our main objective is to deliver accurate information regarding the upcoming or ongoing anime, the information we provide is usually taken from leaks, rumors, previews, interviews, and trailers.
FOLLOW US
© Copyright - HowHyped.com